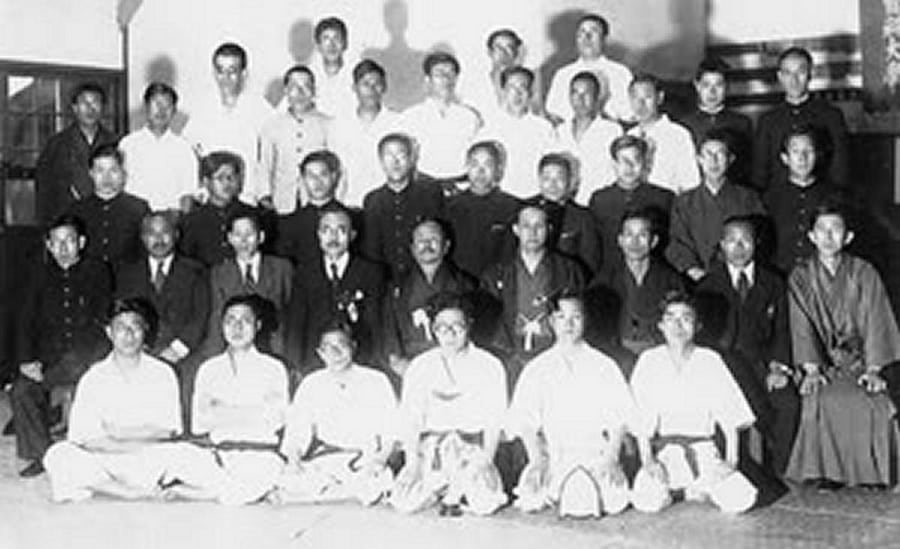 Although it seems that Otsuka stopped training Shindo Yoshin Ryu Jiujitsu as a stand-alone discipline around this time, many of its techniques and principles were incorporated into what would become Wado. Shindo Yoshin Ryu Jiujitsu doesn’t appear to be practiced on a widescale anymore, but there are some external groups that still train it such as the Takamura Ha Shindo Yoshin Ryu Jujitsu line, the Uke Takeski (a student of Otsuka) line , and the Dr. Ryozo Fujiwara line of Shindo Yoshin ryu Domonkai in Tokyo. Another similar style that is still commonly practiced is Tenjin Shinyo Ryu Jiujitsu, which still does demonstrations at the Budokan.

The next year in 1922, an article in a newspaper reporting on Crown Prince Hirohito’s visit to Europe was destined to profoundly affect Otsuka’s life and provide a new direction in his martial arts career. The story said that the Crown Prince had also visited Okinawa, where he was entertained with a dancing performance and a demonstration of Shuri-te style Tode (not yet known as Karate). It added that an Okinawan named Gichin Funakoshi had arrived in Japan and was planning to demonstrate the local martial art at a public hall in Tokyo.

The 30-year-old bank clerk promptly packed himself off to Tokyo to take a first-hand look at what this Okinawan master had to offer. He wound up at Meishojuku, the gymnasium where Funakoshi was training some students in karate, and wasted no time introducing himself to the diminutive martial arts master. “Funakoshi-san welcomed me,” Otsuka recalls, “and said he would gladly teach me karate. “Although most Okinawans appear to be naturally suspicious,” Otsuka added, “he was surprisingly open and frank-even innocent.” From then on, Otsuka practiced karate virtually every night at Meishojuku. And from the first introduction to the Okinawan martial art, ideas started whirling through his head about adapting the atemi techniques he had learned in Shindo Yoshin Ryu Jiujitsu into this ‘new’ karate. Because of his martial arts skill he was able to grasp the principles of karate very quickly.

Within four years, Otsuka was Fuakoshi’s assistant instructor, organizing classes and demonstrations as well as traveling with Funakoshi throughout Japan to spread Karate. The 1923 great earthquake brought with it devastation to Japan, and in it’s wake, many changes. The old schools of jujitsu began to fade in popularity and modern martial-arts such as Judo, Aikido and Karate began to attract the interest of the public. From this time on, Otsuka all but gave up teaching Shindo Yoshin Ryu Jiujitsu, concentrating on Karate and on supporting Funakoshi’s efforts to spread Karate.

In September, 1924, Otsuka and Funakoshi arrived at the kendo training hall at Keio University and approached the Sensei, Konishi Yasuhiro (who taught kendo and jujitsu there and also invented the Shindo Jinen Ryu style of karate) with a letter of introduction from Professor Kasuya of the University. Funakoshi Sensei asked if it would be possible to use the training hall to practice Ryukyu Kempo To-te jutsu (as it was still then called). With Konishi Sensei’s help, Funakoshi and Otsuka established a To-te club at Keio University. This was to be the first university karate club in Japan. During this same time, Master Funakoshi recognized Otsuka, and granted him his black belt in karate making him one of the first Japanese to be promoted in this art.

In 1927, Otsuka quit working at the bank in Shimodate to practice traditional medicine like his father, specialising in the treatment of martial-arts injuries. This left his time more flexible for Karate and also kept him in touch with many martial-artists and schools throughout Japan. He continued his training in karate, and two years later he organized the first school karate club at Tokyo University. But more importantly, in 1929 he launched a study into a method of arranging kumite (free-style fighting) into competitive matches, laying the basis for present-day kumite-style tournaments. Even back then, Otsuka stressed kumite over kata, in sharp contrast to Funakoshi’s teaching methods. By 1929, Otsuka Sensei was a registered member of the Japan Martial Arts Federation.