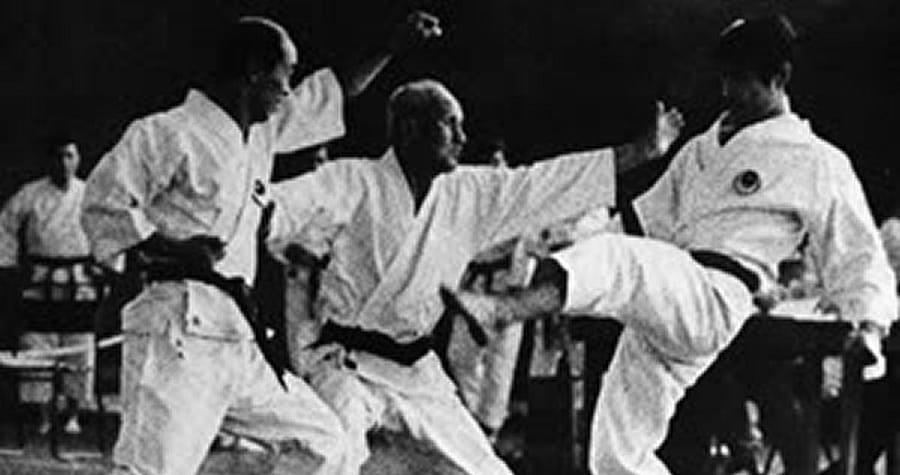 Master Otsuka studied under Master Funakoshi for over ten years and became one of Master Funakoshi’s senior students. After 1930, Otsuka went increasingly on his own, setting up a string of karate clubs at various universities in Tokyo in the manner of Funakoshi. Besides Todai (Tokyo University), they included Rikkyo and Nihon Universities as well as Tokyo Dental College.

Faced with the reality that many of the blocks and techniques taught in traditional Okinawan kata did not seem to work in sparring, Otsuka began to blend the practical fighting methods of jujitsu with karate. He experimented with masters such as Shito-Ryu Founder Kenwa Mabuni(1889-1952), Naha-te Fighting Master Choki Motobu(1871-1944) and in other martial-arts with Jigoro Kano of Judo and Morihei Ueshiba of Aikido, blending the practical and useful elements of Okinawan karate with traditional Japanese martial-arts techniques from jujitsu and kendo. He worked tirelessly and sometimes practiced by himself and with others for six hours a day.

However, the relationship between Otsuka and Funakoshi was growing strained because of the young man’s bright new approach to teaching. He stressed Kumite over Kata, in sharp contrast to Funakoshi, and developed many pre-arranged kumite techniques much to the dismay of Funakoshi who believed that basics and kata were enough. Influenced by the direction taken by kendo and also by his new and influential friend, Choki Motobu the legendary Okinawan Karate master, he began full contact free-sparring with students wearing the new Kendo protective armour. This was the beginning of the modern style Karate championship and pretty much the end of Otsuka’s relationship with Funakoshi.

The big day in Otsuka’s life finally arrived in the fall of 1934 when he officially inaugurated his own unique style of karate. He called his new school the Dai Nippon Karate Shinko Club (Japanese Karate Promoting Club). It was at this time That the term Wado Ryu was coined by Eiichi Eriguchi.

In 1938 the name was changed to Dai Nippon Karatedo Shinbukai (Japanese Karate Martial Promoting Federation). Also in 1938 Otsuka appeared, with Toshio Kato in Genwa Nakasone’s book ‘Karatedo Tai-kan’. In it Otsuka shows 7 Tantodori techniques (defence against knife attacks, called ‘Tanken-tori – Omote’in the book) against Kato Toshio. That same year the Dai Nippon Butoku Kai awarded him the rank of Renshi-Go and his style was registered as, “Shin Shu Wado Ryu”.

By 1940, the Dai Nippn Butoku Kai held the 44th Budo festival in Kyoto and requested each of its member groups to submit the name of its founder and the official name of the style or school. Wado was registered under the name Wado Ryu Karate Jutsu; along with Goju-Ryu, Shito-Ryu, and Shotokan-Ryu. Otsuka registered some 36 official kihon kumite techniques, tanto dori, idori, tachidori, and other techniques, as well as 16 kata including Pinans 1-5, Kusanku, Naihanchi, Seisan, Chinto, Passai, Niseishi, Wanshu, Jion, Jitte, Rohai, Suparinpei , and became the founder of the first and possibly the only truly Japanese karate style in Wado Ryu Karate.

Otsuka first devised the name Shinshu Wado Jujutsu. This was later shortened to Wado. The term wa means “peace” or “harmony”, but it also represents Japan as a shortened form of Showa, which was the name for the era of Emperor Hirohito. Do or doh means “the way”. By putting the two together you get the way of peace and/or harmony. Originally the style was referred to as Wado kai which is “Wado-style” but upon becoming a hereditary system, the name became Wado-Ryu which is “wado-school.”

Wado is perhaps the purest form of Karate-Do, steeped in Traditional Japanese Jiujitsu and Classical Japanese Bushido (the Way of the Warrior)along with the principles of Kendo and Yagyu Shinkage Ryu the art of the Japanese long sword (which he was taught from Gihachiro Kubo), as well as Toda Ryu, or the art of short sword techniques; and applied all of these influences into his style and teaching teaching. He rejected hardening certain parts of the body such as callousing the knuckles of the hand, believing it was useless preparation. He also discarded techniques which he felt were ineffective. He introduced different kinds of body shifting techniques, a more upright stance for mobility, and reliance on evasion and counter techniques. Its emphasis of technique as opposed to strength and the traditional Okinawan karate maneuvers gave a softness to wado ryu unique in Japanese karate. He also introduced throws and joint locks into the repertoire.