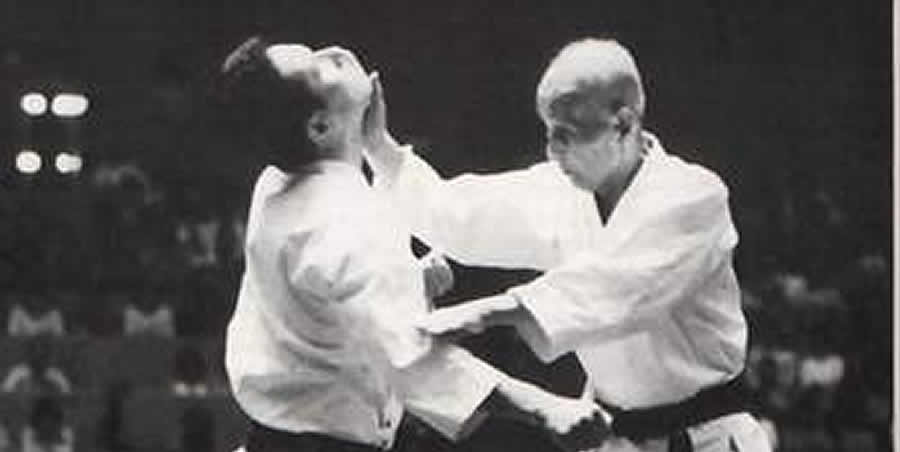 He had developed rules and regulations for competitive free sparring to be incorporated into his system, the first karate style to do so. These rules have been wholly or patially adopted by virtually all modern martial arts competitions. It is the sparring element in todays’ karate that appears to attract many to the art.

The aim of Wado Karate is perfection of technique as well as development of a mind that is tranquil yet alive, able to react intuitively and without hesitation to any situation. The training required in Wado helps the student acquire inner strength and calmness of character. They learn as well the virtues of self-control and true humility.

Master Otsuka’s wado ryu is a tremendously fast style. Its techniques and movements are the total expression of the practitioner’s mind. As well as founding Wado Ryu Karatedo Renmei Federation, he was a founding member of the Kokusai Budoin (International Martial Arts Federation) and Director of the Japan Classical Martial Arts Promotion Society.

Karate for Mr.Otsuka was primarily a spiritual discipline: “Violent action may be understood as the martial arts, but the true meaning of martial arts is to seek and attain the way to peace and harmony.”

Basics – punching, kicking, blocking, guarding, striking, joint twisting and prearranged and free-style sparring comprise the training foundation of Wado Karate. Equally emphasized and fundamental to Wado is taisabaki – body shifting to avoid the full brunt of an attack – a technique derived from swordsmanship. The atemi techniques of jujitsu have had a strong influence in the formation of wado karate. Otsuka also has incorporated the nage-waza (throwing techniques) of jujitsu into his blended style of karate.

As developed by Otsuka, wado karate consists of two practice styles: maai, the proper distance from one’s opponent; and kiai, timing, or finding the best chance to attack. Attacking is also considered defense, since offense and defense are part of the same movement. A blocking movement is often transformed into an attacking movement in what amounts to one continuous motion. In other words, the arm used to block an opponent’s thrust is immediately redirected toward the opponent’s body as a counter thrust, or Sen no Sen. Another feature of wado is its flexibility. When one kind of attack is blocked or stymied, a wado-kai man will instantly shift to another type of attack aimed at different parts of his opponent’s body. He also tends to feint against one part in order to effectively attack another part. Thrusts are not always delivered along a level plane, but can also be directed from a low stance along an upward plane to the body or from a high stance downward. Moreover, attacks are variously made, from orthodox punches and kicks to knife-edge slashes, knuckle jabs and palm thrusts against the chin.

Other concepts that weigh heavy into the study of Wado consist of Nagasu, or side-stepping to avoid an attack; Inasu, or blocking and countering at the same time; Noru, timing your counter at the right moment so to maximize force generated by forward motion; Zanshin, being constantly aware of your surroundings so as to be in harmony with them; Yasume, being relaxed except at the moment of impact; Irimi, or entering your opponent; and Mudana no Waza, or the elimination of unnecessary motion.

In 1942, the Dai Nippon Butoku Kai awarded Otsuka with the rank of Kyoshi Go. In this same year, a young Tatsuo Suzuki began his study of Wado. Later in 1944, Otsuka Sensei was appointed Japan’s Chief Karate Instructor.

During the war, Otsuka continued instructing students in his newly -established style of karate as well as working as a medical specialist in budo injuries. Although the occupation forces banned the practice of martial arts immediately after the war, Otsuka continued teaching karate, since his club, like many others, operated under the disguise of offering boxing instructions.