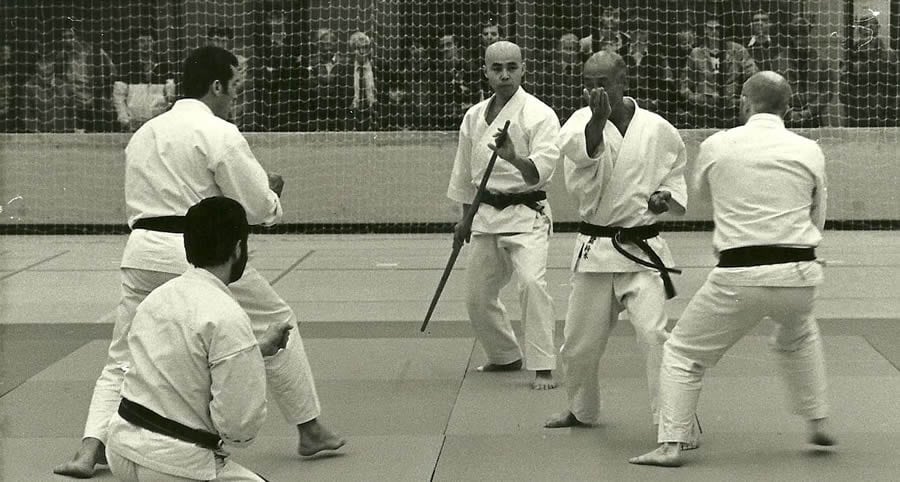 In 1970, the master text “Wado Ryu Karate”, was published by Otsuka. It showed step by step demonstrations of each of the 9 core Wado kata, and shared much insight into the ideas and principles that Otsuka used to form Wado.

In 1972, The International Martial Arts Federation, Kokusai Budoin awarded him the Hanshi Award, an even greater honour. Otsuka was again the first karateka ever honored by the royal family with the title of Meijin. Along with this award came the honour of being ranked at the head of all martial arts systems within the All Japan Karate-do Federation (Judan or 10th degree Black Belt). This is the same status as that of Kyuzo Mifune in Judo and Hakudo Nakayama in Kendo.

Shortly before his death Master Otsuka was recognized as the oldest practicing karateka in the world. Master Otsuka said “The difference between the possible and the impossible is one’s will,” and he always emphasized that the karateka should always hold true three vital elements – the heart, spirit and physical strength.

Even an above average man in his seventies or eighties would probably have been content to rest and let others continue his work, but Master Otsuka was not. Never believing that he or the martial arts in general had learned all that there was to know, he continued to practice. Putting on his gi (training uniform), he would train every day for twenty minutes on just one technique, and continue this for a full month. Those who have studied with him remarked how he enjoyed walking on the crowded streets of Tokyo, so that he could practice smoothly weaving and twisting (tai sabaki waza) without letting anyone touch him.

In 1981, some month’s before his death, a group with Otsuka’s son Jiro (who changed his name to Hironori Otsuka II) as its chief split off form the Wado Kai, and became a private organization known as the Wado Ryu Renmei.

Master Otsuka practiced karate daily until his death in his 90th year, on January 29th 1982.

In 1989, after continued attempts to reunite Wado into one organization, Tatsuo Suzuki left the JKF-Wado Kai and formed his own organization, the Wado Kukosai WIKF, with his goal of accurately teaching the techniques that he had learned from his Sensei Otsuka.

In 2009 Sensei Jon Wicks became the world chief instructor for the WIKF. Sensei Wicks has won all major Wado-Ryu titles including the World Championships, European Championships (four times winner) and Wado Cup. He has for many years trained directly under Master Tatsuo Suzuki 8th Dan Hanshi, ensuring that the authentic style of Wado-Ryu is maintained. Sensei Wicks has accompanied Master Suzuki on international exhibitions and teaching courses over many years. Master Suzuki, recognized Sensei Wicks expertise and dedication to teaching authentic Wado-Ryu karate in the traditional style, by making him the world chief instructor in 2009.

To this day, these three organizations continue to promote Wado Karate, along with many other smaller, and independent organizations. And as Wadoka meet and exchange with each other from within and across these divisions, it is still very easy to see the strong spirit that Otsuka Sensei left behind binding all Wadoka into one family, each searching for the Way of Peace and Harmony.